Cumberland has teamed up with Sharp Transport in a campaign to hit 10 Miles Per Gallon.  #RACEto10MPG

From late August 2017 through mid-September 2017 follow udpates for the Race to 10 MPG by joining our email list and/or following Cumberland and Sharp Transport. We’ll be sharing pictures, route updates, MPG stats and video along the way.

Both drivers will complete the same route to see who can average 10 miles per gallon through several states and back to Middle Tennessee.

Jarit Cornelius, Fleet Director or Maintenance, at Sharp Transport says, “The plan here is to push the fuel efficiency envelope! We at Sharp will begin our 4 week project with Cumberland’s C10 LT demo Friday afternoon in hopes to break the 10 mpg barrier for the first time. We will be providing updates via web, social media outlets, and email with info from our drivers throughout the process.  There is a friendly competition between our drivers to see who is able to sustain a 10 mpg average or more during their 2 week course. We couldn’t be more excited about it!”

Read all Race to 10 MPG articles. 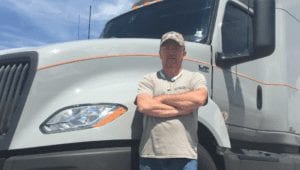